UPDATE: We have new neighbors to our East. Very nice people and they are excited about our Christmas lights. So happy one scrooge has moved away!!! Please respect our neighbors properties when visiting and don’t litter or park in front of their homes. There is lots of parking at the school….

Unfortunately every neighborhood has one or two miserable people which try and make things difficult for others. We, unfortunately have two which are the ultimate scrooges. One in fact attempted to rally the neighborhood against us to have Burlington actually create a bylaw making it illegal for large Christmas displays. Thanks to the huge support of the community this was defeated fefore it could even be discussed. First I’ll discuss the first neighbour .

Every neighborhood has them and of course ours does too. We have been doing our Christmas lights for more than 20 years. Everything was fine until we decided to put an addition on our home. At that time our neighbors to the West of us decided to cause us nothing but heartache. They petitioned the neighbors telling them we were building with no permits. They did everything they could because they did not want us to renovate our home. This all started well into the building of the addition. Since then the neighbors have done everything possible to make our lives difficult.

Every year Bob parks his car in a position, often on the lawn, to try and block the view of the lights from people.

One year he even parked his car on the road and parked more than 3 feet from the curb in order to make things difficult and dangerous for cars driving by. We had to call the Bylaw officer to get this dangerous situation remedied.

Our lights are often vandalized and we have very strong suspicions. We have had to put on an elaborate infrared security system to protect our lights from vandalism.

This neighbor has drawn messages in crayon on our windows.

Last year he decided to make his fence longer in order to try and make it difficult for us to put our lights on our house. We welcome the fence and it has not hindered us at all.

It is sad that something that makes so many smile makes one person so miserable.

On, December 8th, 2000, after a large snow fall, we asked our neighbor if he would please not use his snow blower to blow snow onto the display. He could easily blow snow onto the other side of his driveway. He ignored our request and covered our display with his snow. When we tried to remove the snow from the display he actually used his snow blower to blow snow on mom. I caught this on film as we are really starting to be afraid of this individual. 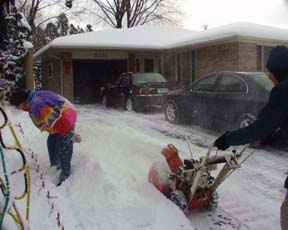 Scrooge Neighbor #2 (Update…this neighbor has moved. New neighbors to the East (left when facing our house) are great!!!)

For more than 10 years we were friends with the neighbors to the East.  in fact Mike Cioci for many years helped us put up the lights.  Then suddenly before Christmas 2011 he lost it.  While we were setting up the lights he approached us and told us he was no longer our friend and that he was absolutely furious that we extended our display in the back of our home.

We had been doing the display in the back for almost 10 years.  He told me that if I turned the lights on in the back he would kill me.  Because of this we didnt turn on the lights in the back.  Incidentally he said he had no problems with the front lights.

Needless to say I reported him to the police who said if there was any more threats to call immediately.

We assumed since we gave into Mr. Cioci’s demands the problems were done but No.

As we are setting up the 2012 display bylaw officers came and told us Mike Cioci had complained again about the lights. We were not even setting any back lights and Mr. Cioci had told us he had no problems with the front lights.  The bylaw officers interviewed us and after an investigation ruled we were not a nuisance and could continue.

Was this the end?  Of course not.  This vindictive arrogant neighbour tried to rally neighbors against us.  Mr. Mike Cioci got a total of 5 people including himself to write letters of complaint to the city about how our display is ruining the neighborhood.

The city called a hearing to discuss if they should even investigate this.  the newspaper got involved and this led to hundreds of supportive letters being sent to our city counsellor.  We can not thank people enough for the kind letters.

The hearing was held and Mr. Cioci spoke with all his lies.  Doug Muson spoke in support of the lights.  The vote wa 7-0 against Mr. Mike Cioci!

Also two amazing things happened.  First a For Sale sign went on Mr. Cioci’s lawn then secondly a SOLD sign!  This vindictive, arrogant, self centered man is moving! Ive heard out of province.  I only pity his new neighbors.