A Collection of Poetry by Joanne Elizabeth Musson 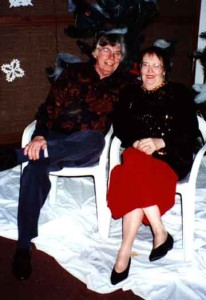 Joanne was born and raised in a little town of Stirling Alberta.  The daughter of Joe and Delight Proctor.  She was raised on a small farm.  At 19 years old she  married Doug Musson.  She now lives in Burlington, Ontario.

Joanne was raised in and remains an active member of the Church of Jesus Christ of Latter-day Saints.  Many of her poems have been influenced by her strong religious beliefs.

Joanne is the mother of 4 children, Gary, Scott, Cam and Deb.  Many of her poems relate to her children and her grandchildren, Jackie, Jessica, Vanessa, Joshua, and Sarah.  These poems are Our Daughter, Granddaughter and Cub Rally.

Joanne’s life has not been easy.  On   May 10th, 1998 her son Cameron was killed in a terrible motor cycle accident.   This tragedy has had devastating affects on the entire family and one of the poems, Our Cam, specifically was written for Cam as was Our Harley Davidson Man. She also wrote a poem for Cam’s 35th birthday,if he were still allive called Happy Birthday Cam. There is a web page devoted to Cam if you click on his name.

Joanne’s son’s Scott and Gary both served as missionaries for the Church of Jesus Christ of Latter-day Saints and there is a poem relating to that volunteer service called To Our Missionary..  Her second son Scott became a medical doctor and there are poems relating to him called Scott and A Goal is Won.

Her poems are influenced strongly by her feelings.  Not all of the poems are happy and in fact reflect a life of many challenges.

Many of Joanne’s poems relate to events around her.  She is an avid Blue Jays fan.   She also loves Disneyland.  She also writes about world events like the Space Shuttle Tragedy and frustration with her country, Canada.

Joanne is a well loved piano teacher and she has even written a couple poems about Music and her Teaching.

One of the poems, My Dad is about Joanne’s husbands search for his real father after being separated from him for almost 50 years.  Doug did find his father and has developed an new relationship with his dad.

The Musson family loves Christmas and Joanne has written a poem about Christmas Night.   They also have a famous Christmas display which you can see if you click here.  Unfortunately the Musson’s have a pair of the worst Neighbors money can buy who have caused nothing but heartache for the Mussons.  There is a poem about them called Neighbors.

As more poems are written this site will be continuously updated.